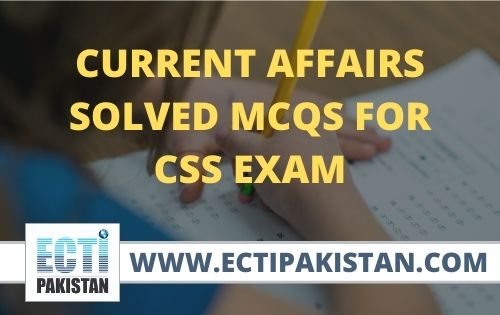 What is the CSS Current Affairs MCQs’ True List?

Most of the students usually prepare CSS Current Affairs MCQs as they see in the exam, where all three wrong answers are there. But, a true list is a piece of actual and true information that we need to memorize or comprehend. All wrong answers are irrelevant. We need to prepare the original and true answer. ECTI Pakistan is one step ahead to prepare MCQs as it should be prepared.

The next step is a twist list: a list that has the same information but in a different way.

Simple information: Pakistan has four seasons in a year.

Twisted information: In a year, Pakistan has four seasons.

The basic objective of general knowledge MCQs is to check the level of true information you have. With this effort, you will be able enough to cope with the core information to remember.

In the next step, we should check our information accuracy by general knowledge MCQs online Test. I am sure this practice will help you a lot. CSS Exam is a different and versatile one for checking the required competence of its candidates. So keep adding the maximum true and authentic information regarding all subjects including current affairs.

We hope that with a series of these CSS Current Affairs MCQs, you will be in a better position to prepare for the exam.