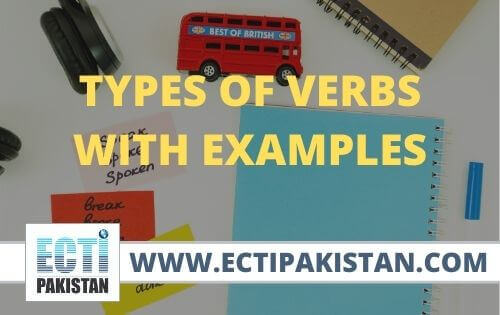 Students get the idea about distinct Parts of Speech in English grammar like Nouns, Pronouns, Verbs, Adverbs, and many more at the school level. It is the foundation of students to understand English well that will help them in further education.

Further, most people are confused about different words that they are in which types of verbs. With this article, you have a deep understanding of the types of verbs with multiple examples of verbs.

When it comes to verbs, then it is the most vital part. Without a verb, sentences don’t make any sense. The reason behind it is that in any sentence:

If the verb is not present in the sentence, it will not be counted as a complete sentence.

On a broad spectrum, we have two major types of verbs that are action and non-action verbs. Other subtypes are quoted below:

So, we will have a detailed discussion of the types of verbs with examples.

Mostly, the verbs are action verbs or main verbs. It means that someone or a subject is performing any action. Actions may include eating, playing, watching, running, or any other.

The first one is the transitive verb that refers to doing some action by someone and affecting the object. So, if a sentence contains a transitive verb, then it will affect the object directly.

We will take some examples that are easy to learn the transitive verbs:

On the other hand, when an object does not follow the verb directly or a verb that has no direct effect on the object. In this context, sentences are completed without an object.

Let’s elaborate with the examples:

Apart from the action verbs, certain verbs play a role in linking the subject with the noun or phrase. These verbs are like in, at, feel, etc.

Moreover, while using the linking verbs in the sentences, they will not just play the role of linking verbs, but they will also work as helping verbs.

Regular verbs are the verbs containing the two same forms. The second and third. You can add “d” or “ed” to make the second or third form.

Here are some examples:

You will understand more genuinely with the help of examples:

Moreover, sometimes different infinitive and same participle forms. You will see that many times they all are different.

We will see irregular verbs examples:

Apart from other types of verbs, there are finite and infinite verbs. Finite verbs depend on the subject. You can say that it will change according to the nature of the subject. Further, you can access the time with the finite verb that when it is completed.

Let’s do practice with multiple examples:

Infinite verbs are not considered as a verb. While making sentences, you will use “to” before the verb. Just like to hold, to sleep, to buy, to know, to play, etc. on the other hand, infinitive verbs will not work as an action of a sentence. The sentence can be present, past, or future tense, but the infinitive verb will remain. It will never change.

These are three several types of infinitive verbs:

Gerunds, when used with the infinitive verb, will act as a noun. Likewise singing, playing, going. They ended up with the sound of “ing.”

When it comes to the participle, they will work as adverbs or adjectives. They also come in the form of “ing” you can use them as a present participle and the past participle.

The last type of verb contains an auxiliary verb. These are also known as helping verbs. They will help in making a proper sentence. Auxiliary verbs work in diverse ways. You can get an idea about the time (present, past, or future) with an auxiliary verb.

While using them as helping verbs, you should use the main verb that will make the sentence more significant in the reader or listener’s view. They include has, have, do, is, am, has, was, etc.

Read out the auxiliary verbs examples that will further help you in better awareness.

We have gone through the various types of verbs and how they will perform their specific task accordingly. Hopefully, you have seen different acts of verbs as per their types.

So, you should know that without verb sentences are incomplete. You can get more in-depth learning about the action verbs and other verbs with the exercises.

Lastly, If you have kids and want to learn the types regarding the verbs, you can offer them verb games. That will help them to learn effectively.